DECORAH, IA–The emerald ash borer has struck Decorah’s ash trees and the effect of this attack could be fatal. The EAB’s trend to kill ash trees and make them brittle enough to break
and fall, possibly on citizens, is dangerous.

In response to the growing threat, the Decorah City Council began to implement an EAB management plan on Jan. 28 to commence removal of ash trees over the next few months, with workshops to learn about how to care for trees occurring Feb. 28 and March 12. Checking in on the process of the removal since the implementation, spreading the word on the danger of EAB has been an important starting point. 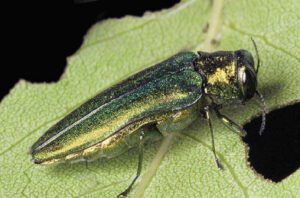 “EAB is a small, metallic-green, invasive wood-boring beetle native to east Asia that attacks and kills ash trees. The tunneling and feeding activity of the larvae is what ultimately kills trees,” according to the Iowa Department of Natural Resources website.

These beetles were first found near Detroit, Michigan in 2002 and have spread to much of the Midwest and Northeastern United States. EAB was discovered in Winneshiek County nearly six years ago.

Effects on ash trees in Decorah and Luther College

“Over about 50 counties in Iowa have identified a presence of EAB. Infestations begin in the upper portions of the tree canopy making it hard to detect them,” said Robin Sailor, Decorah city forester in charge of the removal process. “EAB’s effect on trees that have been left untreated is total decimation.”

“It was recommended that ash trees that would be treated, began treatment when the initial detection was noted,” said Sailor. “Trees that have been left this far into the infestation (about 40% canopy infestation) have a low possibility of successful treatment.”

The seriousness of the situation is massive as much of Decorah’s land involves ash trees, bringing forth why the plan has been implemented.

“An independent tree inventory was taken over the course of two summers, and this indicated that a little over 14% are comprised of ash species (referring to Decorah’s urban landscape),” said Sailor. “It is estimated that an additional 1200 ash trees are located on private property.”

The amount of ash trees that surround Decorah make the situation dire. While the EAB infestation continues, the trees begin to become brittle because it cannot transport the nutrients and water it needs to survive with, since EAB feeds on the supplements.

“Due to this process, trees have been found to be exceptionally brittle, and considered hazardous to public safety and arborists challenged with removing them. Studies show that when left standing, trees snap off causing unpredictable hazards,” said Sailor.

The possibility of an ash tree snapping off could cause for many accidents around Decorah and lead to fatal harm for many citizens. This is why the Decorah City Council has vouched to accept the removal of ash trees.

Luther College has followed suit with also having their own plan to combat the EAB’s threat to the ash trees on campus.

“Decorah’s ash tree plan is independent from the college’s plan,” said Ivan Hackman, assistant director of facilities services at Luther College. “But yes, Luther has a plan for ash trees on campus.”

A projection of the removal process sees it taking up to the next four years considering the process of budgeting, the extent of the EAB damage, and the amount of trees affected. “It will be an ongoing monitoring process,” said Sailor. “Private landowners are strongly advised to form a management strategy that best suits their needs.”

Luther College has already been working on the removal process since finding EAB in the campus ash trees.

“We had 27 ash trees on the immediate campus area before the emerald ash borer was identified in the area,” said Paul Frana, grounds supervisor. “Since that time we have removed and replaced 10 of those trees and have treated 3 trees.”

Nevertheless, both interviewees stated that it is important to make sure to consult with a professional arborist before attempting to deal with any sort of removal of a tree on a property. 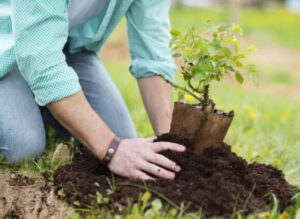 The question, though, is what will take the place on the ash trees in Decorah and Luther College once they are removed? Like Frana hinted to earlier, replacing the trees is the next step after removal.

“With the effect of ash tree removal, it is vital to be replanting our urban canopy. I work closely with the Decorah Tree Board applying for grants to replace trees at no cost,” said Sailor, referring to right of ways. “There is also a tree voucher program in place for ROW helping to offset replacement trees, and open spaces in ROW.”

Yet, the most important part of replacement process is making sure to make the landscapes with diverse trees.

“The more diversity, the less chance that an invasive organism can devastate a large percentage of a tree species in a given time,” said Sailor.

This being something Luther College has as well been working toward with their own replacement trees.

“Trees can be treated using an insecticide but in most cases the cost is prohibitive to treat all trees, since the treatment needs to be done every three years initially and then every five years for maintenance,” said Frana. “The best approach with any tree management program, though, is diversification of species.”

For now, Sailor and the Decorah City Council will continue informing the city and making sure people know what they are up against while this removal process takes place. Outreach to them will be a key element as they move forward with their plan. The plans involve continuing the community outreach through media coverage, workshops, and collaboration.

“I would encourage folks to attend the workshops we will continue to give, from novice to seasoned veteran, there are always opportunities to continue to learn. The more knowledge that is shared, the greater the successes can be counted,” said Sailor. “Decorah is unique for its urban canopy cover, and the benefits it provides. Keeping canopy cover vital and healthy shows a commitment to sustainable stewardship.”

The removal process will continue to take action over the next year and on. Look for more information of possible workshops or announcements on the Decorah city website moving forward.

Photo 1: Emerald ash borer beetle
Photo 2: Street in Toledo, Ohio affected by the EAB before in 2006 and then in 2009
Photo 3: Person planting a tree provided by the Horticultural DNA website