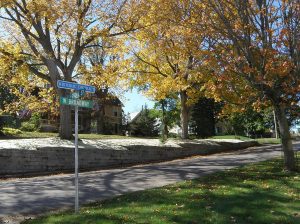 Consists of seven blocks of residential area and Decorah’s oldest city park; the district is situated on one of the most prominent hills in the heart of town. Included in this area are five churches, three governmental structures, a local museum, a local brick kiln, a carriage house, and 36 private residences in addition to the city park square and river bluff. The district, which historically has served as a desirable residential area, contains structures built from the 1850's to the early 1900's; several later structures are also present. The majority of the buildings are two story or more, many employing local materials such as limestone, sandstone, or native brick.

In 2010, the Broadway-Phelps Park Historic District was amended in order to include the Weiser poultry house and retaining wall at 608 West Broadway.  The amendment is available here.